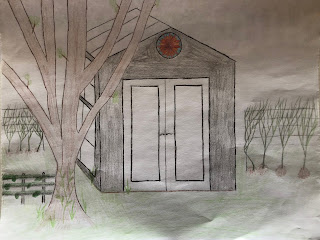 The inspiration for this project came out of nowhere. I had been looking forward to working on my Gold Award for a long time, but I had no idea what I wanted to do. Several years ago I came up with the idea to build a greenhouse out of recycled materials for the food pantries to use. After a lot of research I decided this wasn't going to work out and started working toward beginning a different project.

In October of 2017, my mom took the local home-
school group (which she helped with) out to a local farm to learn about what they did there. The woman who owned this farm expressed her desire for a greenhouse, and my mom told her about my idea.

From there we started meeting and planning. A fundraiser was held in March of 2018 to raise funds for the building materials. Facebook posts and emails went out to start collecting glass bottles and old windows. Community members came together to provide me with a couple thousand bottles and enough windows and doors to build two greenhouses of the same size (12x16).

There were significant setbacks during every step of the process. I won't go into details, but the challenges continued to stack up. However, I am happy to say that after almost a year of planning, we are finally almost done with the greenhouse. Because of all the delays on the main part of my project, other aspects were also put off. These will be documented as they occur in the coming months as opposed to looking back on them as I will do with the greenhouse.

I hope you'll stay tuned to learn about what happened with my greenhouse and see what happens in the coming months.

Above you'll see the concept design for the greenhouse. This was entered into a scholarship contest for world-changing projects.
Posted by Unknown at 8:16 PM